On 20th November, an Eagle tagged with satellite tag was brought to the guard station of Selkeh wildlife refuge.

JICA Expert Team saw an Eastern Imperial Eagle (Aquila heliaca) in a rehabilitation cage of the guard station. According to a guard, the Eagle was illegally captured by net of local people. The Eagle was very wet and weaken.

The satellite had a plate with email address of Dr.Marton Horvath, species conservation manager of MME BirdLife Hungary. Mr. Watanabe, Wetland Ecosystem Conservation Expert of JET, sent email him to inform the situation of Imperial Eagle.

According to Dr.Horvath’s reply, the eagle is called “Dymka” and it has been tagged in Russia in last summer with Russian ornithologists.

Their website linked as below mentions that Dymka was nestling when he was tagged on 24th July, 2016 in Tatartstan, Tatarska Dymskaya, Russia. They tracked the migration route by using Argos system. Dymka started to migrate on 28th September and flied around the east side of Caspian Sea through Kazakhstan and Turkmenistan. Finally Dymka arrived at Gilan Province on 24th October. Dymka stayed around the Anzali Wetland from 3th Nov until capture.

The Anzali Wetland might be an important wintering habitat of Imperial Eagle based on this result. 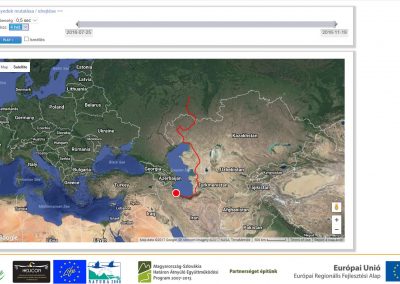